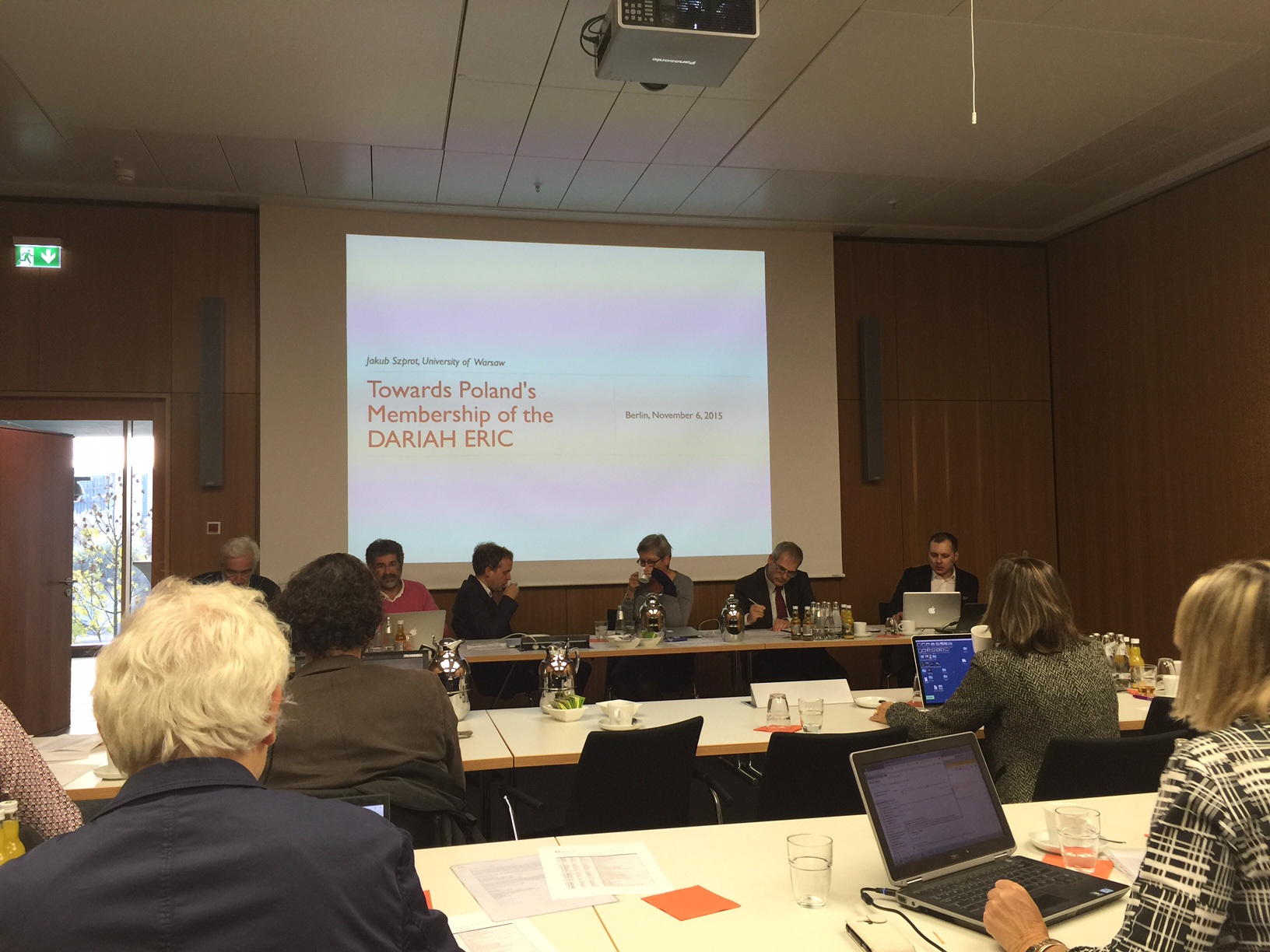 After meeting stringent formal and operational criteria, on 6 November 2015 Poland joined DARIAH-ERIC (Digital Research Infrastructure for the Arts and Humanities). The decision to accept Poland’s membership was made unanimously by the General Assembly of DARIAH-EU sitting in Berlin. Poland has thus become a full member of this leading international digital humanities organization.

Membership in DARIAH-ERIC gives Polish scientific and academic institutions new opportunities for cooperation with European partners. Poland may now participate in international working groups, seek European funding together with foreign institutions, offer its research infrastructure to scholars from abroad, and make use of similar resources provided by its partners.

Dr Dariusz Drewniak from the Ministry of Science and Higher Education serves as National Representative, i.e. the official contact person for DARIAH-ERIC. Jakub Szprot (affiliated with the Interdisciplinary Centre for Mathematical and Computational Modelling at the University of Warsaw) serves as National Coordinator. He is also a member of the University of Warsaw Team for DARIAH and a member of the Board of DARIAH-PL.

‘This is a very big day for Polish humanities. We have joined the elite ranks of best European institutions that are working to develop digital humanities infrastructure. This is an up-and-coming research area worldwide. It is important to note that our accession was eagerly anticipated in this European network, because we have a lot to offer to DARIAH-EU, in terms of our operations and by providing organizational support. We are now going to focus on ensuring that Poland plays a significant part within DARIAH-ERIC and has bearing on the decisions made across the organization,’ said professor prof. dr hab. Aleksander Bursche, president of the Board of DARIAH-PL..

The decision of the General Assembly is the last step in a procedure which the Polish consortium began nearly a year ago, with backing from the Ministry of Science and Higher Education. On 18 August 2014, the founding agreement of DARIAH-PL was signed. The primary purpose of the consortium was to ensure Poland’s membership in DARIAH-ERIC and to foster cooperation between institutions involved in digital humanities and developing the relevant infrastructure. At present, the DARIAH-PL consortium has 18 members. It is coordinated by the University of Warsaw. The preparatory stage before the accession to DARIAH-ERIC included an analysis of the projects and infrastructural resources of the members of the consortium, with a view to outlining their potential contributions to DARIAH. In July 2015, the Council of Ministers gave a green light to the submission of the application, which was subsequently lodged by the Minister of Science and Higher Education.

At the General Assembly DARIAH-EU on 6 November 2015 in Berlin, Poland was represented by the following delegation: dr Dariusz Drewniak (Ministry of Science and Higher Education), dr Cezary Mazurek (Poznan Supercomputing and Networking Center affiliated with the Institute of Bioorganic Chemistry at the Polish Academy of Sciences, Vice President of the Board of DARIAH-PL), Dominik Purchała (University of Warsaw, Head of Team for DARIAH) and Jakub Szprot (University of Warsaw, member of the Board of DARIAH-PL).